Christopher Strong is an artist and illustrator from Australia who recently completed a two month residency at Dongdong & Lulu in two different cities, Nanjing and Beijing.

China Residencies: What sparked your interest in China?

Christopher Strong: I’ve had an interest in Asia and particularly China for a while now. A lot of my art has a focus on Asia. China was a natural choice for me for a residency. My initial interest in China was sparked by the fact it is totally different and much more complicated to where I grew up and what I am used to in Australia.

CR: What interested you in particular about Dongdong & Lulu?

CS: I wanted to live like a Chinese artist and learn as much as I could about the art scene in China, but have necessary support if I needed it. Dongdong and Lulu were able to offer me an immersive residency while helping me with any problems or requests I might have.

Another big factor was I had to undertake the residency in the last three months of 2014. Dongdong and Lulu were flexible about the timing. I started looking at Dongdong and Lulu after I emailed staff at China Residencies and explained who I was and what I was looking for, and they gave me the recommendation.

CR: Did you apply with a specific project idea in mind, or were you looking for inspiration on the spot?

CS: I went with a plan, but it was broad and flexible because I knew I would be inspired in China and I wanted to allow that to come through in my work. I didn’t want to go to China and just continue painting the same way and about the same themes as I was painting in Australia.

Everything in Australian life is quite small and simple so one thing that has always fascinated me about China is that everything is massive and complicated (at least from my perspective). My art project was about looking at very large things and making them smaller, and very small things and making them larger. I also wanted to complete paintings in my three favourite styles, just to get some feedback from other artists. 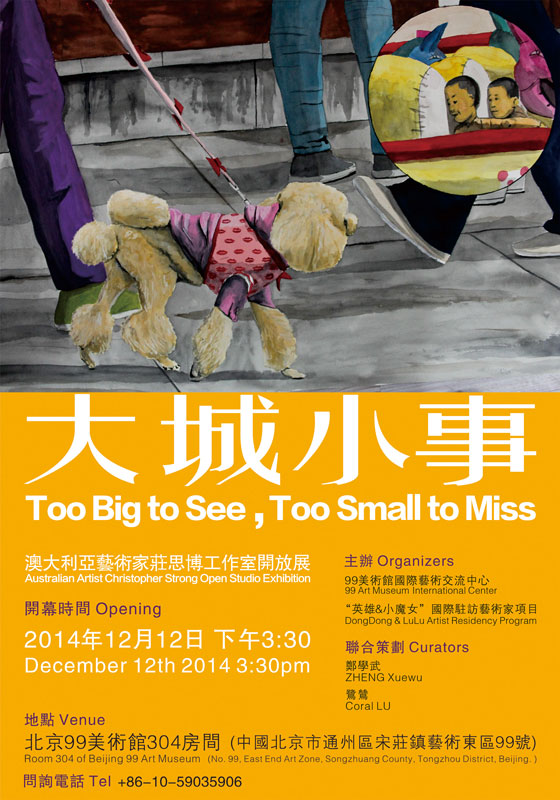 There is a full artist statement on the Dongdong and Lulu website.

CR: Did your work or practice change significantly during your time in China?

CS: Yes, it did. I didn’t take any of my materials with me and what I had access to in China was different and behaved differently to what I am used to in Australia so you can see differences in my work. I was getting feedback along the way from different people about what they liked, how I could improve and what they didn’t understand, and this affected my decision making for later work.

I am pleased that the work I completed there, which was about 25 paintings, are works which would not have happened had I stayed in Australia. They are representative of a time and place, and my experiences.

CR: You participated in two exhibitions while you were in China. How did these come about?

CS: I was very fortunate to participate in two group exhibitions during the residency, which is something not all residents get to do. It was a combination of luck and hard work. After I arrived in Nanjing and it became obvious I had landed amongst a lively art scene with a big network of artists and arts managers, so I decided to work very hard during the first three weeks to get a selection of work completed so if any sort of opportunity came up to display my work I would be able to participate.

The first opportunity was the 2014 International Youth Art Salon held at Hebei Normal University's museum of art. The opportunity came when my host, Coral Lu (Lulu), heard that the University was looking for international artists to participate and she asked me if I was interested. I sent her pictures of the work I had completed and they selected one of them. I was given the opportunity to travel from Beijing to Shijiazhuang with other international artists to participate in the opening. After seeing the other works and artists included in the exhibition I realised exactly how fortunate I was to be given the opportunity.

The second group exhibition was at my host institution 99 Museum of Art in Songzhuang, Beijing. The Museum had a number of international artists in residence and they decided it was an ideal time to have an exhibition. A number of Chinese artists were invited and in the end over 30 artists contributed work. I was not directly involved in organising the event but I was able to witness how it started and developed, which was very useful. The exhibition was called Far and Wide ran for a month starting on my last day in China.

CR: Did you have an open studio, or an artist talk during your time there? If yes, tell us more!

CS: I had an open studio exhibition on my final full day in China. It was held the same day as the opening of the group exhibition which took place on the floor below, which meant more people were nearby and could come and view my work. It was very pleasing that after two very long and exciting months I was able to put my work on display, which was over 20 works. It was a very valuable experience seeing the different people come into my studio and answering their questions. I was very lucky to sell some paintings too.

Coral Lu was very helpful in creating the poster and promoting my exhibition through her networks.

CR: If there were other artists around while you were there, what were they like?

CS: There were other artists around all the time. Some I met over dinner and some just dropped into my studio and introduced themselves. Artists were happy for me to come into their studios to look at their workspace and see what they were working on, and drink tea. They were all very friendly and helpful, especially when I was trying to speak Chinese but they didn’t quite understand. Everybody was using Weixin (WeChat) and I added many new contacts.

I especially remember the exhibition openings I went to and how these differ from what happens in Australia. For example, after a solo show opening in China it is custom for the artist to treat everybody to dinner. One of the dinners I attended in Nanjing had close to 200 people, many of whom were part of the art community.

CR: You spent the first month of your residency at the Fangshan Art Camp. What was that neighborhood like, and was Nanjing like as a city in general?

Fangshan Art Camp is a growing arts area with maybe 40 artists in the complex. These artists ranged from people beginning their career to some highly regarded artists in China. The area was under development with new buildings about to be built. It was also used for music festivals and other activities, but was quiet most of the time. It is a great location to get a lot of work done. It was over an hour to the city which has both positives and negatives. I was lucky that some student journalists found me in my studio one day and offered to take me around the city if they could do a story on me, so they gave me a good introduction to the main historical sites and gave me some tips. A number of artists invited me out for a meal so I got to experience different restaurants. 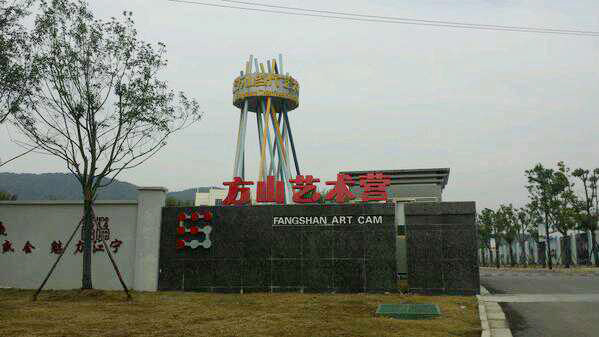 CR: You then went on to Beijing, to the Dongdong & Lulu residency in Songzhuang. How did the second half of your residency compare to the first?

CS: Songzhuang was very different to Nanjing. I am glad I changed locations to get a better understanding of the Chinese art community and the networks between cities. To me Songzhuang is like a small town on the outskirts of Beijing. There were galleries and studios everywhere, most of which had been developed recently. It was also home to factories, shops and cafes. A lot of artists spent their time between Songzhuang and the areas around 798, Beijing’s famous art district.

I stayed at 99 Art Museum which had three galleries and very friendly resident artists and staff.

CR: Had you been to China before? Did you speak any Chinese before coming?

CS: This was my sixth time in China, but the first time actually painting there. I have been to about ten cities. I have been learning Chinese for about five years. Understanding the language and culture, particularly how to behave in certain situations compared to what I might do in Australia was very valuable during my two months.

CR: Did China fit your expectations? Or did what you discover on the ground surprise you?

CS: China always surprises me, which is one reason I am so interested in it. I was surprised at how developed the Chinese art market was. I had heard that arts in Asia in booming but some things I witnessed made me realise how much it was growing and how many opportunities there are there.

CR: Did you feel you encountered a significant cultural or linguistic barrier?

CS: There were always challenges but usually we could overcome them with the help of Coral Lu and the people I met. Even when there were no English speakers anywhere people usually allowed me the time to look up the dictionary on my phone and work out what I needed to say. It was difficult sometimes but that’s part of the excitement of undertaking work overseas. If you show that you’re trying to learn the language and culture, people will usually help you. Many people were interested in my background and culture too, and the art scene in Australia.

CR: Overall, what experience, adventure or encounter will stay with you from this time?

CS: Definitely the final day. I was already quite exhausted from two months of excitement but on the last day I had a group exhibition opening and my open studio. 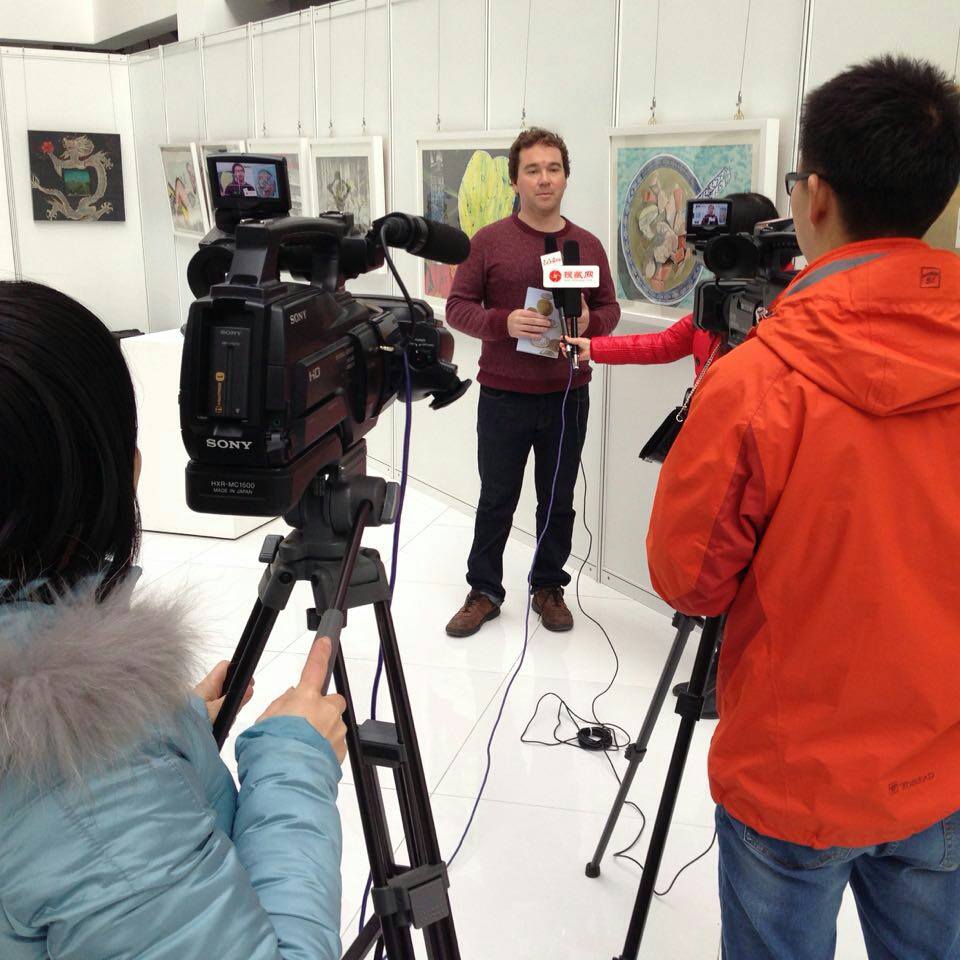 Firstly I had to prepare my studio for my own exhibition. Next I had to go downstairs to the museum’s main gallery for the opening of the group exhibition, including meeting people and doing a brief introduction to cameras. Then my open studio took place which went for a few hours and I was very fortunate to make some sales. Following all this, because it was my final day, I was invited out to dinner at a restaurant that had a karaoke machine and a calligraphy table. After dinner the artists took turns painting at the table and I was invited to have a go, even though I don’t have much experience with Chinese ink painting (which is surprisingly hard).

CS: Yes, I am very interested in going back to China, preferably for a longer stay. I will be exploring my options in 2015.

This interview was conducted via email by Kira Simon-Kennedy for China Residencies.