A little history and context:

Hong Kong is a special place. It’s unique, as a literal “special administrative region” that engulfs Hong Kong island and its surrounding archipelago right off the coast of Shenzhen, as well as Kowloon and the  “New Territories’ which are on the “mainland” but stand worlds apart from the People’s Republic of China (usually called “Mainland China”). Hong Kong is also has an unusual trajectory: once an island of small villages, it's now grown into one of the world’s major global economic, financial, and increasingly, cultural hubs. In 1842, parts of Hong Kong were annexed as part of the colonial British Empire after the Opium Wars. In 1860, the British grabbed land in Kowloon up to Boundary Street (hence the name). For some reason, in 1898, the British decided to only lease everything north of Boundary Street for 99 years, then agreed that the island would be returned to China after the lease was up. The handover in 1997 created the "one country, two systems" rule in which Hong Kong would (in theory) maintain everything about its way of life, except defense and foreign affairs—its own currency (Hong Kong dollars), its own passport, its own borders, the rule of law, freedom of assembly and speech, and many other socio-political structures set up under British rule—for at least another 50 years, with whatever happens after 2047 to be determined. But mainland China's reach already encroaches on many of these conventions. In 2014, the Umbrella Movement, pro-democracy protests erupted all around the city to demand universal suffrage, and the debate over territorial and cultural independence continues even more vehemently in 2019 and 2020.

Around 8 million people live in Hong Kong today. The landscape is a mix of extremely dense urbanisation with skyscrapers built into the sides of mountains, adjacent to a lush tropical jungle. The Kowloon side looks and feels closer to cities like Guangzhou and Shenzhen (which are just about an hour’s train or ferry ride away). Hong Kong’s MTR is fast and quickly expanding, there also network of double decker trams and buses, and the north side of the island is quite walkable. Ferries connect Kowloon and Hong Kong island if boats are your thing, but Hong Kong overall is extremely hilly with a network of staircases and escalators so biking isn’t really an option in most parts of town. Hong Kong’s air quality is OK, but pollution from manufacturing plants on the mainland has a tendency to drift over. It’s hot and humid most of the year, with an extremely rainy summer season with occasional typhoons.

Cantonese is the most widely spoken language, and Hong Kong uses traditional Chinese characters, as opposed to the simplified ones employed on the mainland since the 1950s. British colonisation also made English widely spoken, and now, Mandarin is also becoming more common, though Hong Kong–Mainland sentiments vary from indifferent to extremely hostile (see above protests for reasons why). Hong Kong also has a huge community of Filippina, Indonesian and Thai women, working mostly as domestic helpers under unfair labor conditions, with Sunday as their only day off where they gather in public spaces. Hong Kong is also home to a sizeable expat community, many working in finance, law, and hospitality.

Hong Kong’s commercial art galleries, auction houses, nonprofit organizations, and independent, community & DIYs spaces have established a strong presence over many decades, but in recent years, the art world’s attention turned to Hong Kong as a major focal point in Asia. With Art Basel running an edition of its monumental art fair in the city since 2013, and several private and government-initiated museums in the works, Hong Kong is primed to become an even bigger supporter of arts and culture.

Sheung Wan was one of the earliest places occupied by the British. The area is dotted by parks, markets, temples, and ladder streets (stone staircases connecting these neighborhoods with the mid-levels further up the mountain.) These neighborhoods make up the central part of the north coast of Hong Kong island, and form the core of downtown. In Central, tall skyscrapers, malls, and office buildings line the hilly, multi-level landscape. Blue chip galleries are clustered in the Pedder Building, while other art spaces and popups sort of blend in among shops in malls. In March, major art fair Art Basel takes over Hong Kong Convention & Exhibition Center while Art Central sets up tents along the ferry piers on the waterfront, while nonprofits and museum nestle into more residential areas. 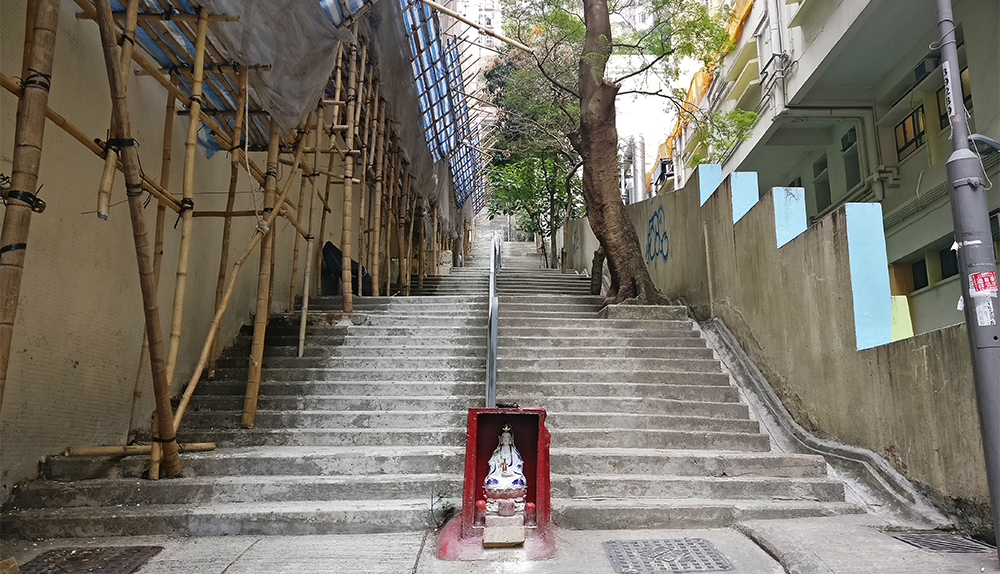 "Hong Kong is just interesting, it’s such a tiny island that has a lot of cultural and historical significance for China and the global context as well. It’s a city full of traders, of mediators, who have always been able to speak many languages and tell many stories. That’s the flexible, dynamic nature of the Hong Kong spirit that can mediate between the East and the West. As for the art scene, I think we need to have more rigour and push towards becoming a leader of culture. For that to happen I think our ecology has to be expanded because it’s still very narrow."

Travel eastward along the north coast on the MTR’s island line from Central and you’ll arrive in Wan Chai, Causeway Bay & Quarry Bay. Before massive land reclamation efforts, these areas were actually bays, but now Causeway Bay is a major shopping district, whereas Quarry Bay, a former rock quarrying area settled by Hakka stonemasons, is also becoming more commercial as former industrial buildings and factories are converted into apartments & malls. Several nonprofit spaces and government-run art initiatives recently set up in the area in historical site like Oi! as well as ordinary office buildings, like the Foo Tak Building, a whole skyscraper of ACO subsidized spaces for nonprofits, design & artist studios, and show some of the more impactful work grounded in Hong Kong’s local community. 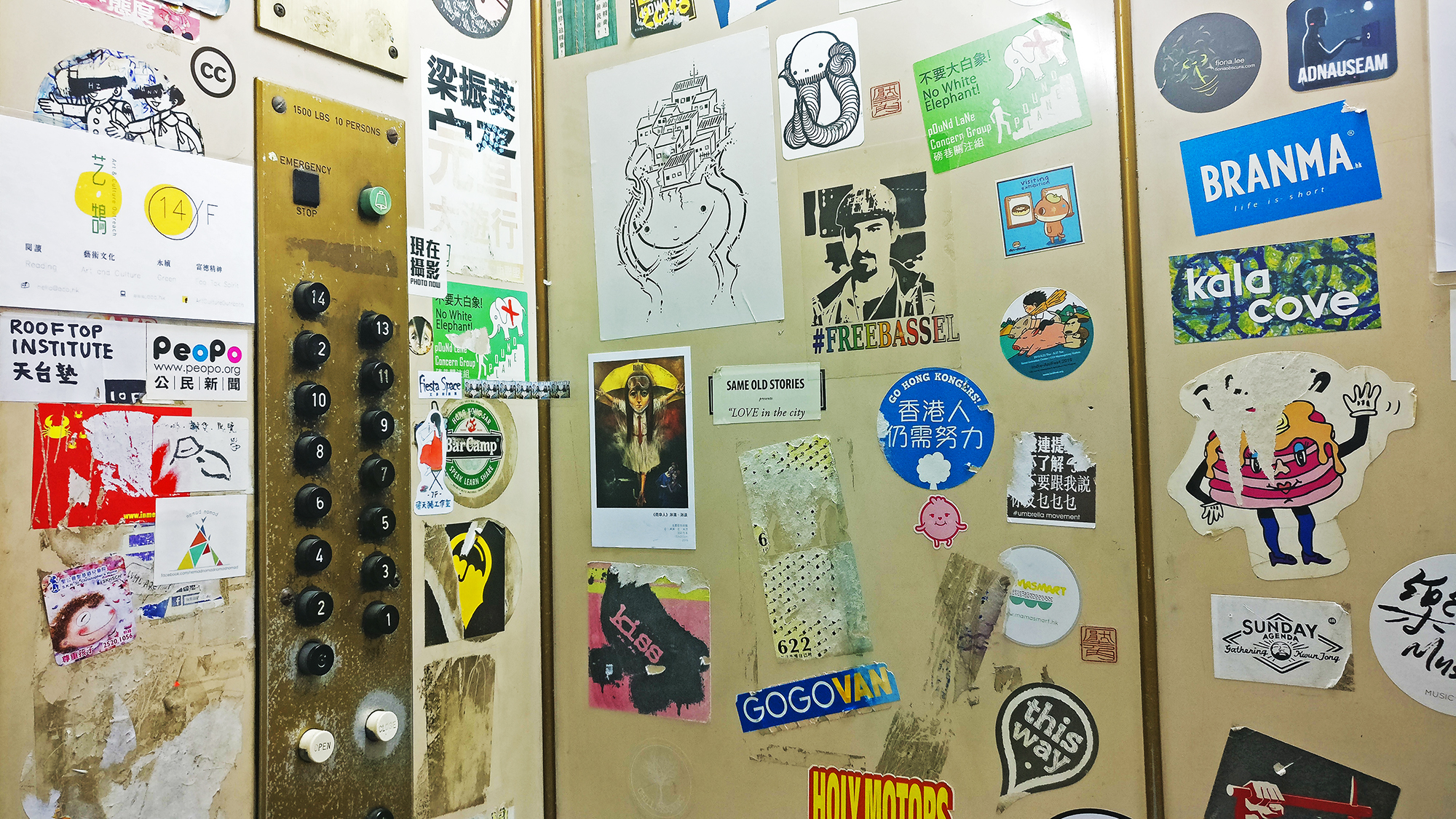 The Southside of the island has recently been named the South Island Cultural District, and is home to a growing number of galleries & nonprofit spaces seeking lower rents, larger spaces, and a quieter atmosphere away from the hurried northern side. The MTR opened in 2015, making it the area much more accessible by public transit. 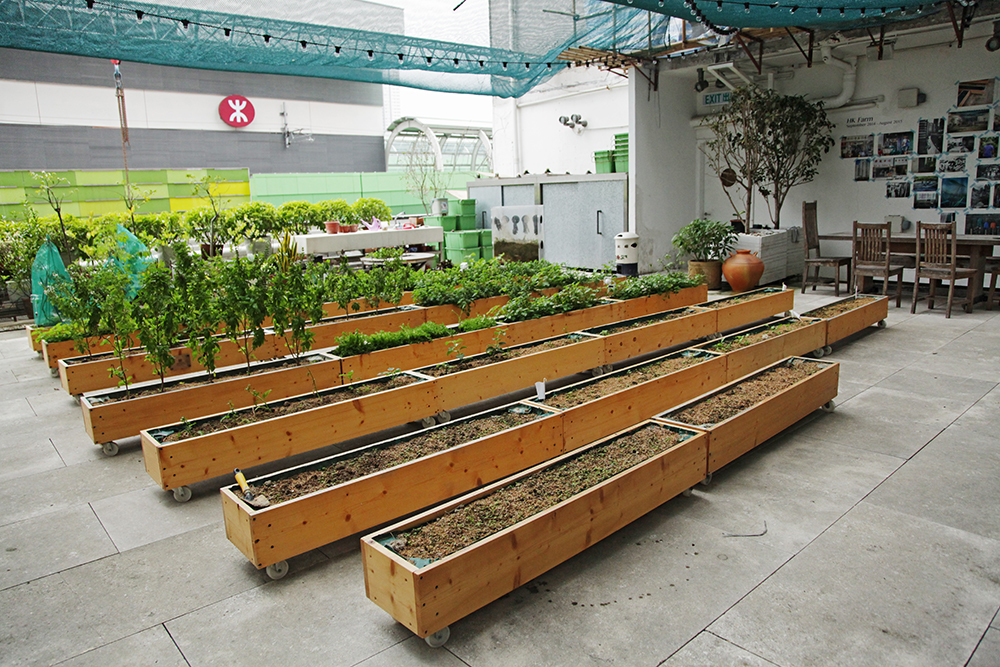 "With Hong Kong Farm, we have also have autumn harvest workshops and we also invite children and anyone who is interested in teaching a class with the planters and so in a way its also trying to communicate what were doing, and not make this something really insular and secret. We are very interested in opening up processes."

Kowloon means ‘nine dragons’ and used to be mostly jungle (apparently the British went tiger-hunting there...) Nowadays, Kowloon is just a ferry ride or a few metro stops away from Hong Kong island. The southern waterfront of Kowloon, Tsim Sha Tsui (abbreviated TST) is a major shopping destination for tourists from the mainland, and is also home to a growing museum mile along the waterfront, with the West Kowloon Cultural District eventually to be home to M+, Asia’s largest museum for contemporary visual culture. Since 2012, M+ has created online, popup & roaming exhibitions as the museum’s opening date keeps getting pushed back (and now is slated for 2019).

Kowloon’s infamous walled city stood there until its demolition in 1993, and, aside from TST, is mostly working-class as well as home to many of Hong Kong’s immigrant and migrant communities from South-East Asia. The City University of Hong Kong’s main campus is in the area, and many students live nearby. Kowloon is also where some of the most vibrant independent spaces set up shop. In Sham Shui Po, artists host temporary noncommercial projects in an apartment buildings, motorcycle shops, factories and offices. A government-run arts district in the repurposed Cattle Depot is home to art spaces like Videotage & 1A as well as larger-than-life performance artist Frog King. In 2019, Eaton Hotel in Jordan reopened with a new mission to focus on creativity & social justice, complete with artist and activist residencies, a gallery, screening room, a music venue & radio station. 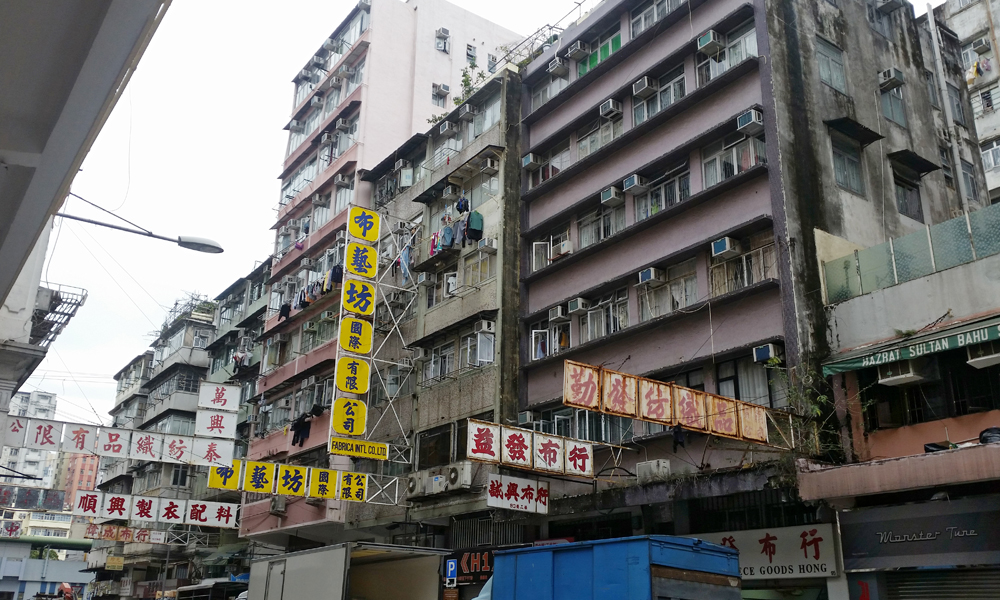 Apilu Street in Sham Shui Po, home to Things That Can Happen and 100ft Park.

"Our space isn’t about programming, it’s a responsive and fluid art space. It made sense to have a space for artists to live in, and it just worked out that this space had that. Residencies are a good way to get in touch with people who aren’t in Hong Kong but who could contribute to the conversation and bring them outwards to connect them with conversations happening elsewhere."

- Chantal Wong, co-founder & director of Things That Can Happen [closed in 2017]

To the north of Kowloon lies the New Territories, just below the border with mainland China. Mill6 Foundation opened a massive art space and residency in a former cotton spinning factory in 2019, CHAT (The Center for Heritage & Textile Arts), and the Fotan Studios in Sha Tin is home to hundreds of artists who host annual open studios. 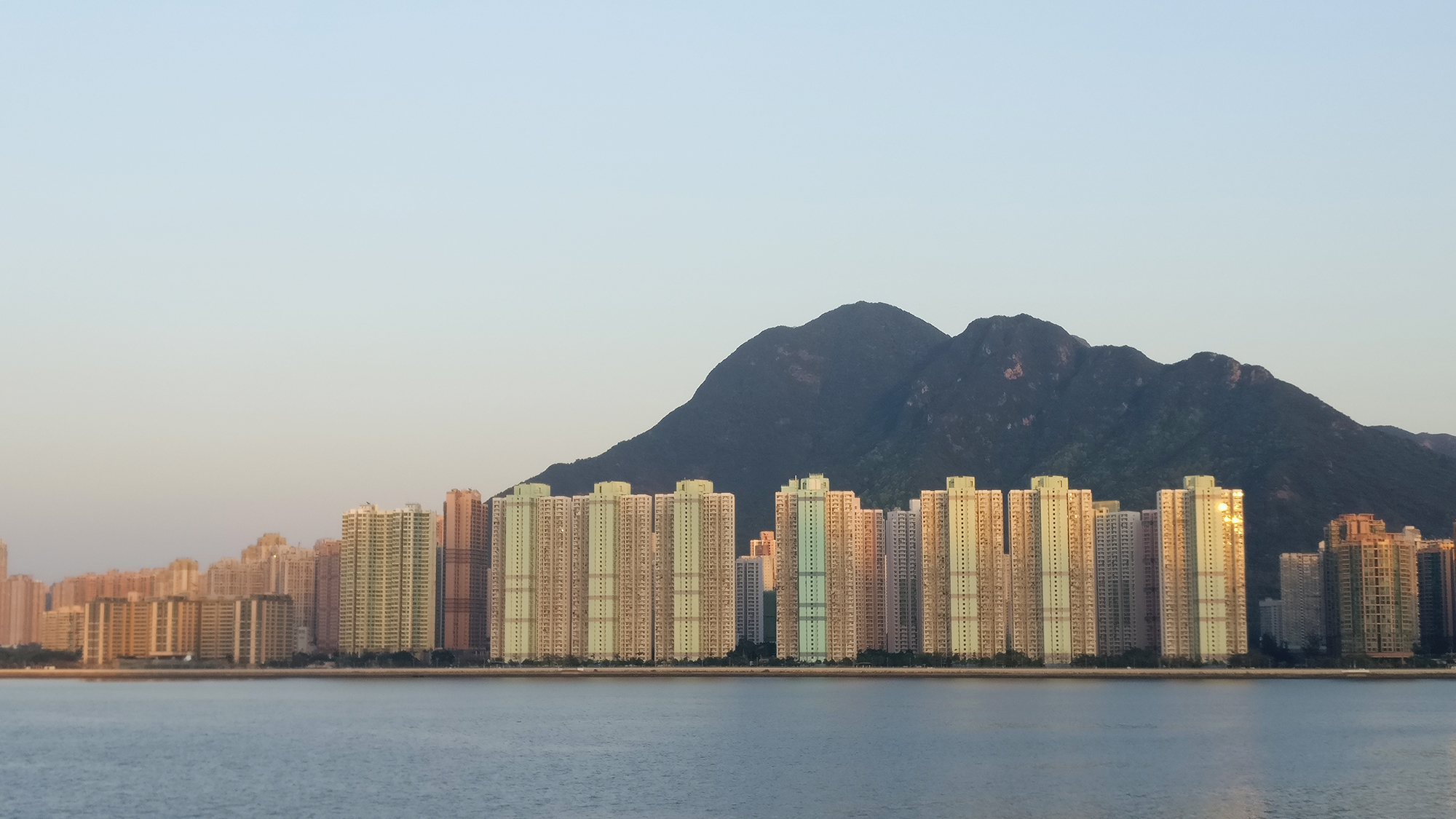 Art Fair Week happens in the middle of March, with Art Basel, Art Central, the Photo Book Fair, the South Island Cultural District Day and many more events, openings, and parties all crammed into one week to coincide with when a slice of the international art world parachutes in to Hong Kong.

Film Festivals: Hong Kong is one of Asia's main cinematic hubs, with the Hong Kong International Film Festival taking place every year since 1972. The city also hosts a multitude of independent festivals, like the Pineapple Underground Film Festival, Fesh Wave (for shorts) and Jit Ze, as well as an edition of Sundance and film festivals showcasing films from the EU, France, and the Jewish or LGBT communities.

On top of our general recommendations for staying up to speed with the news in China, here are a few English language Hong Kong specific resources: Hong Kong Free Press, South China Morning Post, Time Out, My Art Guides.

Check out our public China Residencies Google Map and zoom in to Hong Kong to find all the places listed above!

Many thanks to our Hong Kong-based friends for their input and to the Australian Embassy Beijing for their support in developing these China Residencies Artist City Guides! Our resources are works-in-progress and will be updated regularly. Send us a note at nihao@chinaresidencies.com with your suggestions and recommendations.